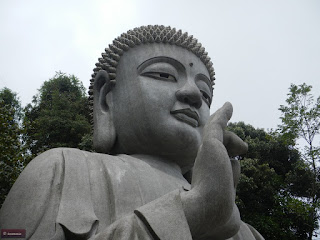 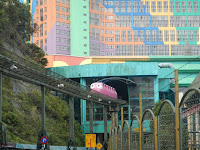 We drove from Fraser`s Hill On the 55 towards Gumut and Batang Kali an estimated 60miles to the Genting Hill resort (we call it "The hill of Horror"), not knowing what to expect, but with the plan to stay there a night. As usual the road was good and once going up even had 3 lanes. The first thing we saw was a pagoda in a Chinese style and right on top of the hill massive hotels in low clouds. It turned out the Pagoda was part of a Chinese temple (and Hotel) built by a Chinese industrialist who 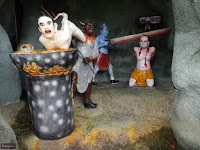 founded the Genting Highland Resort, thanking the gods for his good fortune.  It was impressive in it`s own way and we thought it was worth seeing. After a stroll around we headed for the top to find a place to stay (what a nightmare) All you see when you get there are massive Hotels surrounding a theme park with all different attractions, all the parking leads to Hotel lobbies and the only parking outside we found was at the staff car park. Off to the 1st world Hotel to ask for a room (never seen anything like it) Inside the building was a roller coaster, all different restaurants, food stalls and shops, very interesting to see for a short while. At the reception of the Hotel you had to take a numbered ticket as there were hundreds of people waiting, I am not joking. Also, prices for hotels and entrance for the park were not cheap. We decided this was not for us, so grabbed a quick snack of deep fried Durian (stinky) fruit, went back to the car and drove off. This place was like a cheap copy of Disney world and had nothing to do with Malaysia. All we mentioned here is our own opinion and some others might like this kind of thing, especially families. 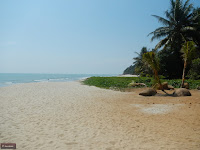 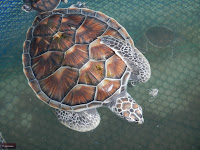 We left the "Hill of Horror" via the 68, then joined the 2 all the way to Kuantan at the East coast where we found a good hotel by the beach for the night. The beach Chempedak by Kuantan is nice, but due to the closeness of Kuantan it is a busy resort, with Mc Donalds and KFC right at the sea front. We liked it though, but travelled on the next day up the coast on the 3 towards Kuala Terengganu which we shall write about next. On our way Fiona suggested to visit the Turtle Sanctuary at Jabatan Parikanan a long beach where Turtles are being overseen laying their eggs and strongly protected. The beach is off limits from 6pm to 6am and the little sanctuary held some interesting facts about turtles. All the East Coast has lovely under developed beaches to offer. No big hotels, just a few places for homestay, no big supermarkets or anything like it. The road on both sides has the old Malay houses on stilts, Palm trees, some local stalls and you can see the odd fishing boat on the beach. To us it seemed, the only ones enjoying the area here are locals. We actually wanted to visit Pulau Kapas an Island just 15 minutes by speedboat off the coast from Marang. But no Ferries or boats were going there due to the monsoon season (we had read otherwise) hey, but we can say we had a paddle in the South China Sea ;) All Photos here
Email ThisBlogThis!Share to TwitterShare to FacebookShare to Pinterest
No comments:
Newer Posts Older Posts Home