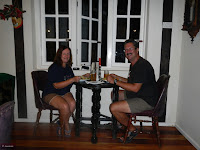 Fraser`s Hill  in Malaysia, most probably the most tranquil place (Photos)
After we left the Cameron Highlands we headed on the 1 towards Kuala Lumpur, a road running parallel  to the Motorway (E1) The streets are in a good condition and driving is no problem at all. We stopped at some native stands where the road went right through the rainforest on the way, having a look at all the strange goods they were selling. It was quite an experience to see what they produce in the middle of nowhere. In Taman Sri Teratai we left the 1and joined the 55 towards Kuala Kubu Baru which leads all the way to Fraser`s Hill. Again in the late afternoon it started raining and it was so bad, there were actual little streams crossing the road, which of course slowed us down and sometimes even had to stop the car on a lay-by. So again, we were running late and it started to get dark, but we had to carry on to find a hotel. The 55, before a very much straight road became really winding and uphill. No village was anywhere to be seen and most strange....there were no other cars on the road, none oncoming and none following. This went on for about 20 Miles and eventually we saw a sign for Fraser`s Hill, a one way 8km street up, and it was forbidden to stop!?? Ok we thought, two choices: 1 to drive back for Miles, or 2: we take the plunge to go up with the chance that everything is closed and all we see is a car park. The drive up was extremely dark and spooky. We, by now, had not seen a car in about an hour. 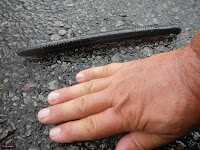 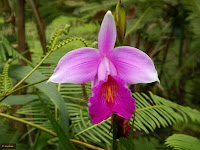 When we finally reached the summit it was such a relief to see a street lantern and then, yes, a hotel smiling at us. We stopped, asked for a room and were very pleased it had ended in this way not just with a bed to sleep in, but finding out there was an actual old English pub right opposite with good food, cold drinks and nearly tame butterflies. The problem in Malaysia is, when you research places, hotels or attractions on the internet, it does not mean they are up to date or actually open. The one thing which struck us straight away was the silence and peacefulness up here, there was only the noise of the jungle. After a lovely morning with mist in the trees and the sun breaking through slowly we went on to explore this strange looking town. English style houses, a few hotels, a golf course, an old English looking post office and a clock tower. We went for a walk around a lake which used to be the old water reservoir for the people up here, surrounded by nothing but nature, followed by a 5 Mile walk to a water fall on a steep but not used road due to a land slide. How fantastic, just when we reached the falls, the heavens opened up and a proper monsoon downpour caught us. 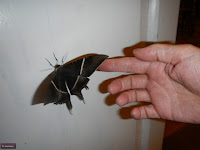 We had to wait for about an hour in a shelter before we could walk back up the hill, accompanied by the noises of the jungle (listen to it at the end of this post) wild flowers and strange fruits, monkeys shouting and nearly stepping on a centipede. We concluded the day with a Malay meal served in our hotel as the Scott pub was unfortunately closed (No pre warning, when it`s closed, it is closed) We stayed another night enjoying the peace and quiet of this amazing place. Tomorrow we are off to the Genting Highlands, apparently the complete opposite, we shall see...


Listen to what we heard on our walk: